It is a glorious day for the cryptocurrency sector with Bitcoin and Ethereum on the rise and, unlike the past few days, today there is a majority of positive signs, with 70% above parity.

Bitcoin and Ethereum: historical day for their prices

This is also a historic day: it has been 100 consecutive days that Bitcoin has closed over $10,000. What has been happening in the last few hours positively surprises the operators too, with Bitcoin rising again to $14,540. This is a level that goes back three years. It was January 10th, 2018, when Bitcoin closed the day above these levels for the last time.

It’s a historic day for Ethereum too, which is slowly rising again, although not with the same intensity, and is now back above $400.

But this is not the news: in fact, yesterday saw the launch of the first deposit contract that starts the final phase of the Ethereum 2.0 testnet. At this point, if the numbers are confirmed, it will be executed on December 1st.

This is a very delicate phase for the continuation of Ethereum, with the historic transition to phase 2.0 which will take place over the coming months. With this deposit contract users have been able to start staking since yesterday, depositing 32 ether. This is the beginning of a new genesis for the Ethereum chain.

Overall, Bitcoin and Ethereum are the best in the top 30, both up by 5%. To find higher rises it is necessary to descend to the 37th position with Celsius (CEL) rising about 10%. The best of the day today as yesterday is HedgeTrade (HEDG) which flies 40%.

On the other hand, the worst drop of the day is Uniswap (UNI), which, together with Yearn Finance (YFI), is marking a major drop of more than 15%.

The general market cap also rises above $410 billion for the first time since May 10th, 2018, almost entirely thanks to Bitcoin, with capitalization rising above $267 billion, the highest level since January 2018. 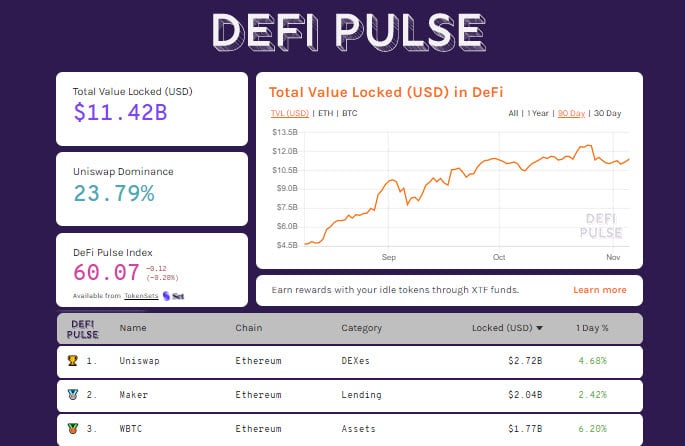 DeFi benefits from the increases and is back to $11.4 billion even though it is not yet at its peak set on October 12th, when the TVL rose to $12.4 billion.

The number of ETH continues to fall. The “farmers” trim down some of the Ethereum to $8.6 million, which indicates that many operators are withdrawing their Ethereum in order to use them in the staking of the new Ethereum 2.0 phase.

The number of tokenized bitcoin remains just under 169,000 BTC with WBTC continuing to climb. This project alone tokenized over 122,000 BTC out of a total of 169,000. At current Bitcoin values, WBTC alone holds over $1.8 billion.

The leading project remains Uniswap, in first position with over $2.7 billion locked. Maker follows with over $2 billion and WBTC with $1.78 billion.

Bitcoin goes back up again and tests the levels where, in the last few days, the hedges of derivatives operators in options have shifted, which see between 14,200 and 14,500 a crucial area to be violated upwards with determination to go and test the historical technical resistance of $15,500, which coincides with 75% of the retracement that takes as reference the maximums of December 2017 and the minimums of December 2018.

With the breaking of today’s values, it is very probable that in the next few days we will see prices that will most likely go to test this historical technical resistance. Downwards, it is necessary to maintain the support of $13,500 in case of violent trend reversals in the coming hours.

After 15 days, ETH returns to review the $405, which is impacting not only technical but also operational resistance where the covers of the protections for possible elevations stand out.

In the case of breakage and confirmation of today’s values at $405, the next level to break down is $420, the highest in the last week of October.

For Ethereum, it is important to understand in the next few hours whether this upward phase of these hours, which sees it excelling with Bitcoin in the top 30, is linked to what happened yesterday with the opening of the genesis block of the Ethereum network or is the consequence of real purchases that prepare the way to go and test the resistance of the $420.

Hence it is necessary to follow very carefully the evolution of the next few hours. In the event of a return of downward speculation, the $355-360 remains valid for Ethereum, which coincides with the relative lows of mid-October and the dynamic bullish trendline that goes from the lows of mid-March and the upper lows of mid-July.

Back to Top
Close Add new link
X
DeFi Coins Yearn.finance (YFI) and Uniswap (UNI) Drop 10% Despite ETH Bounce…AltcoinThe decentralized finance (DeFi) space has seen an extreme correction over the past few days and weeks in spite of a Bitcoin rally. The leading crypto…
Altcoin

by Matt Villie
6 min
X
U.S. Stocks May Benefit From a GOP-Controlled Senate, But Why Is Bitcoin Rallyin…AltcoinU.S. stocks did well on Wednesday (November 4), with the Nasdaq Composite closing 3.85% higher. However, Bitcoin seems to be rallying even harder. Thi…