After BTC topped $44,000 on Monday in a tentative comeback as a portfolio hedge, crypto traders are now focused on areas that could prove vital for Bitcoin’s price even as the Ukraine conflict spurs increased volatility as traders search for bottoms.

According to Gareth Soloway, chief market strategist of InTheMoneyStocks, whereas Bitcoin makes a lot of sense when there is a lot of geopolitical risks, its date with lower prices could still play out. Speaking to Kitco News on Tuesday, the veteran technical trader restated that Bitcoin could slip lower in the midterm, despite being bullish in the long term.

“We are inside of a bigger bear cycle in my opinion,” Gareth was quoted saying. “Yes, I do believe eventually we will see another leg down to $20,000.”

Asked the reason for his assertions, he noted that price has been unfolding what increasingly appears to be a bearish flag pattern.

“What investors have to understand is that everything here in technical analysis land is based on probabilities,” he went on, “so when you see a sharp move down like this there is inevitably a period you go sideways for long periods forming a bigger bearish bear flag pattern.”

Related:  Ether price heads toward $2,000 on back of CPI update

However, the pundit noted that Bitcoin still could push a little higher, although it would be faced by various resistances.

“[in the short term] I think there could be a little more upside but that could be capped around $42,000,” he said, noting that this is the first resistance. If the price manages to break that it has to deal with another ceiling at $47,000 before proceeding to $52,000.

Meanwhile, a trader by the Twitter moniker ‘Rekt Capital’ predicts that Bitcoin could push higher this month, especially after price printed a bullish Monthly Candle Close above $35,000, bringing the Double Top formation closer to invalidation.

He however notes that price has to push above the green 21-week EMA and blue 50-week EMA to close the volume gap after which it could easily return to prices between $45,000 and $65,000. 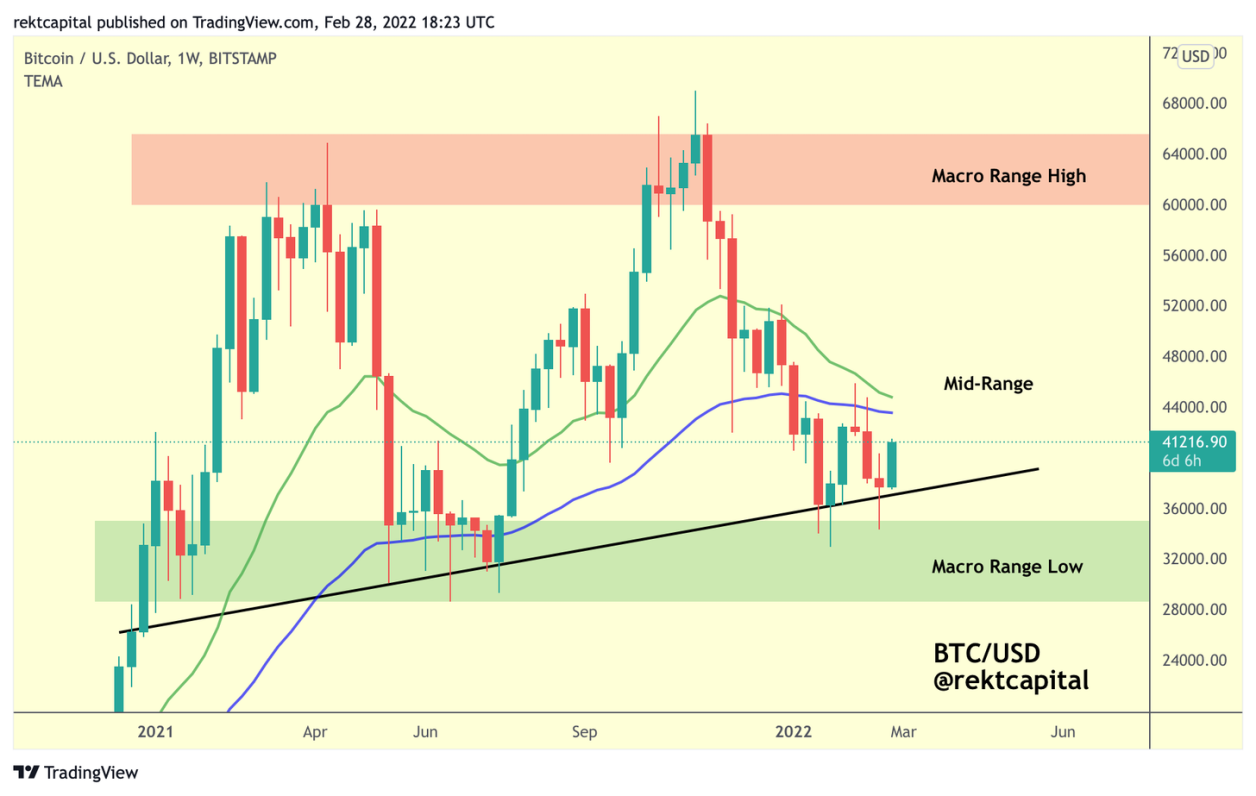 That said, Binance analysts have labeled the recent drastic drops by Bitcoin as “nothing new for seasoned BTC holders” noting that fundamental reports such as individuals and institutions continuing to buy the dip, positions Bitcoin to bounce even higher above its current all-time high level.