Bitcoin has given a powerful buy signal that demanded the financial world begin paying closer attention to cryptocurrencies. The recent momentum has also caused the top crypto asset to “decouple” from the stock market.

Thus far, it has been primarily crypto analysts shouting about the coming decoupling, but now even Bloomberg Intelligence senior commodity strategist Mike McGlone says that the divergence away from the Nasdaq 100 is the “underpinnings for further appreciation.”

Here are the fundamental and technical reasons the top market analyst believes that Bitcoin is ready to beat tech stocks in performance for an extended period, now that the “link” since 2017 has been broken.

Tech stock valuations have reached astronomical figures, even while the economy falls into a depression. Apple, Amazon, Microsoft, Google, Tesla, and several other heavy hitters, are undeniably overvalued, and the stock market could see an extended correction or phase of minimal returns.

Read Also:   This Indicator Shows Ethereum is Structurally Similar to Where BTC Was in 2016

Meanwhile, a top Bloomberg analyst expects Bitcoin to do the complete opposite, and move into a period of extended overperformance against tech stocks.

Bloomberg’s senior commodity strategist Mike McGlone regularly shares his thoughts about Bitcoin over social media and on the big business and finance brand. 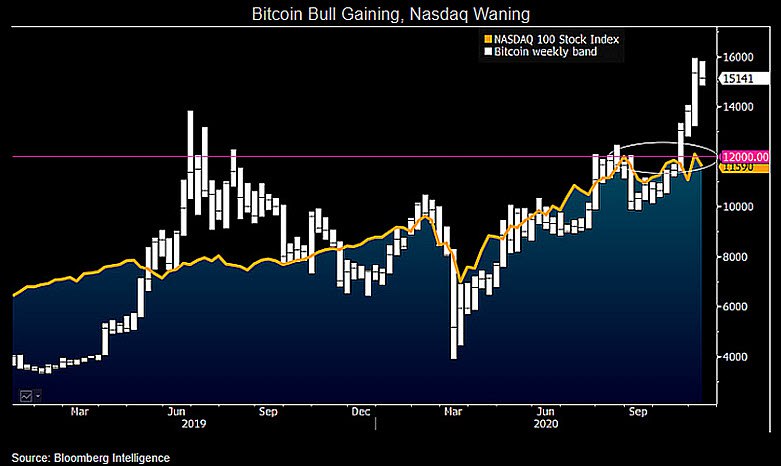 McGlone has shared a new chart, stacking Satoshi’s creation against the Nasdaq 100 index of tech stocks – one of the best performing indices in recent years. The chart demonstrates a clear break of the “extended link” keeping Bitcoin shackled to the stock index since 2017, the analyst said.

The correlation “between the price of the benchmark crypto and technology-led equity gauge appears to be ending, with fundamental and technical factors favoring Bitcoin,” he added.

The visual representation of the Nasdaq’s performance against Bitcoin is just one of the ways McGlone says that the cryptocurrency is poised technically for a boost. The first-ever crypto asset also recently set a higher high and a higher low, confirming an uptrend.

Each time Bitcoin was able to break above the correlation with the Nasdaq, it coincidentally fell back down to retest the indicator line, then surged another sizable percent.

If Bitcoin price corrects back down to support at $11,500, it could be the final buy signal before as McGlone says, the cryptocurrency goes parabolic once again.

Fundamentally, the amount of BTC on exchanges is ever decreasing, while whale-sized wallets grow each day. Nearly every network health metric in Bitcoin is at or near all-time highs, giving the crypto asset the foundation fundamentally to support the bullish technicals, and send it off into a new bull market.

Back to Top
Close Add new link
X
First Mover: Bitcoin Pause, Ethereum Snafu, 1,000% Returns Put Focus on Exchange Tokens…BitcoinBitcoin was higher, pushing toward the upper edge of its recent range between about $14,700 and $15,600.“The positive sentiment towards bitcoin has …
Bitcoin