Disclaimer: The opinion expressed here is not investment advice – it is provided for informational purposes only. It does not necessarily reflect the opinion of U.Today. Every investment and all trading involves risk, so you should always perform your own research prior to making decisions. We do not recommend investing money you cannot afford to lose.

Most of the altcoins have not supported the ongoing sharp rise of the main crypto. Meanwhile, Bitcoin (BTC), Ethereum (ETH), and Chainlink (LINK) are the only gainers today. 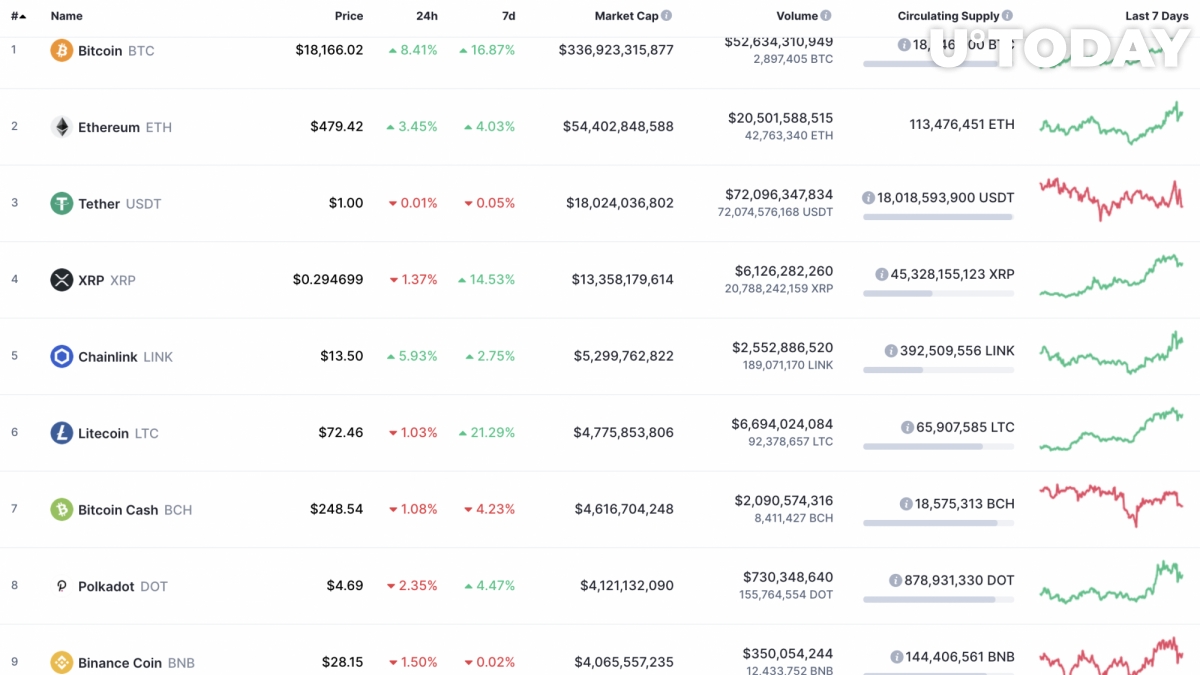 Yesterday morning, the decline in the price of Bitcoin stopped at around $16,570. Before lunchtime, the pair consolidated in a narrow range, and in the afternoon the bulls were able to continue their growth. 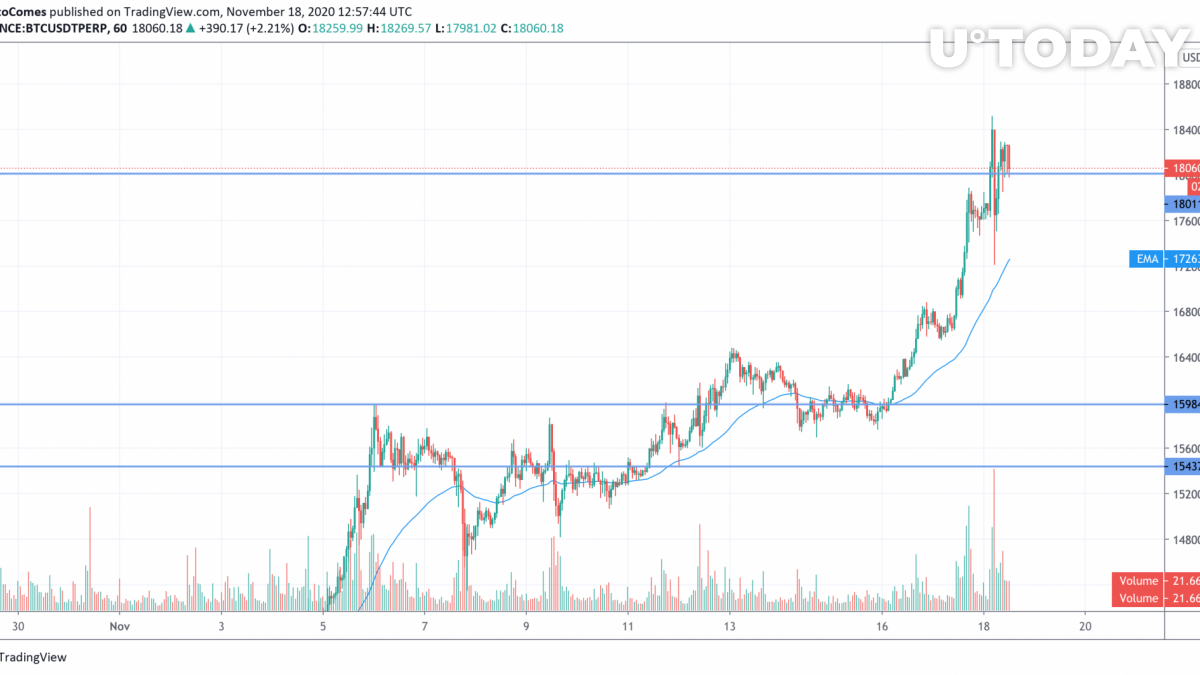 The growth was supported by large volumes and, at the end of the day, the price of Bitcoin (BTC) renewed its annual high at $17,868. This value exceeded the maximum of 2018 and, this morning, bulls are trying to continue their growth and have already managed to test the level of $18,400.

The last time the price approached this level was on Dec. 16, 2017 and, the next day, a historical maximum was recorded. Whether the bulls will be able to set a new absolute record in a crazy 2020, above $20,000, is impossible to say with firm certainty. But if the bull run continues at the same pace, then it is quite possible. One might consider that, after the maximum around $18,500, the pair may retrace to the $17,600 mark.

Yesterday, the rise in the Ethereum (ETH) price was supported by large volumes and, in the afternoon, the pair broke through the resistance of $480. 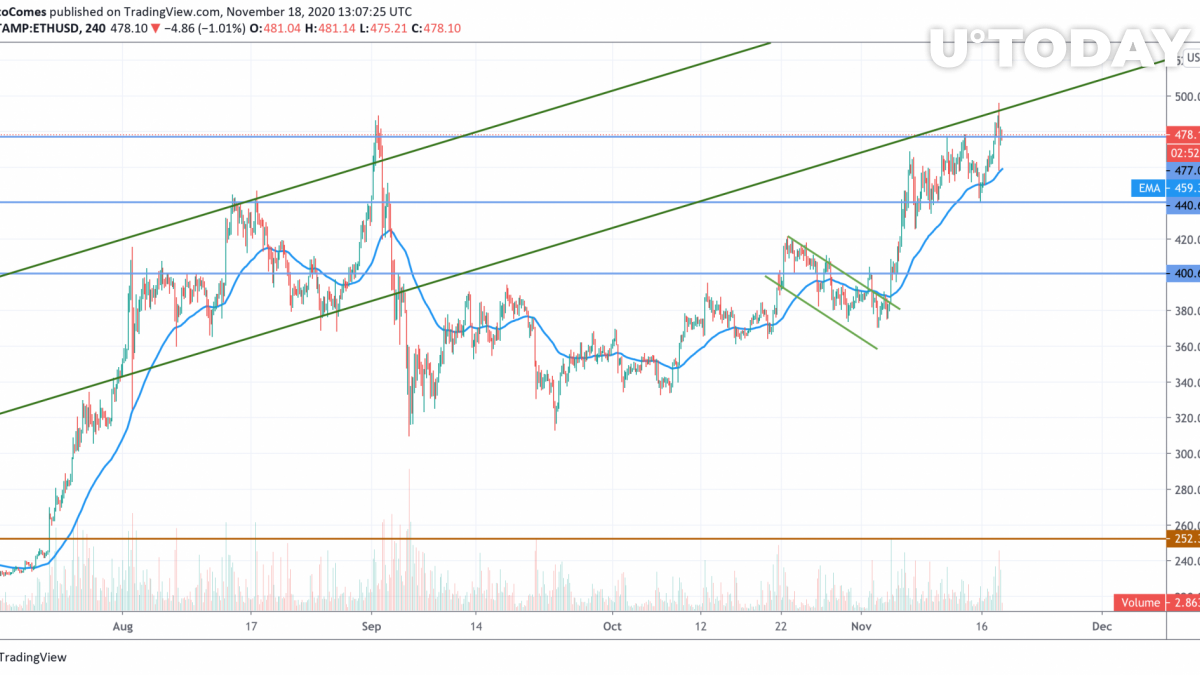 Until the end of the day, buyers struggled for a long time to the trend line, which slowed down further growth. But tonight, the bulls broke through the uptrend line and, in the morning, renewed the annual maximum very close to the psychological level of $500. If, after a rollback, the rate remains above 50% fibo ($457), then explosive growth may continue and the pair will test the level of $515.

XRP is one of the losers today. The price of the altcoin has declined by 1.37% over the previous 24 hours. 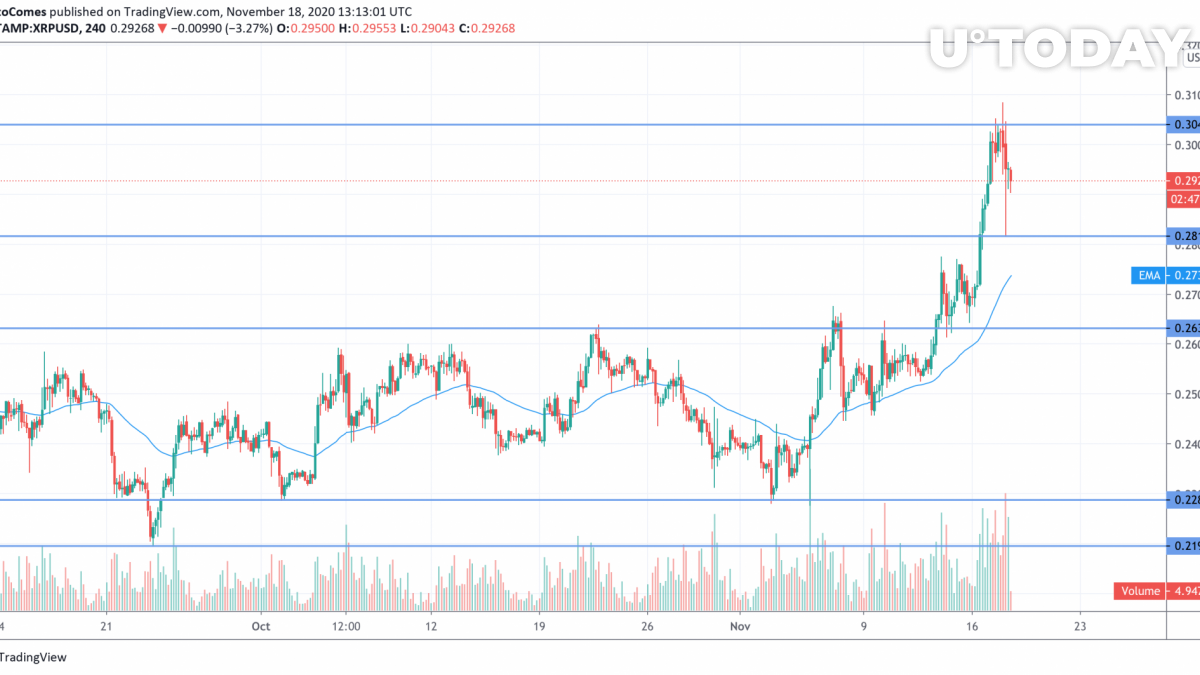 Yesterday the price of XRP continued to rise and, in the afternoon, bulls overcame the psychological level of $0.30. At night, the pair renewed the monthly maximum at the point of $0.309, but further growth is held back by the resistance of $0.310. If the bulls cannot cope with this level today, then the price may roll back to the support of $0.28.

Tron (TRX) could not follow the rise of Bitcoin (BTC), and its rate has gone down by almost 2% since yesterday. 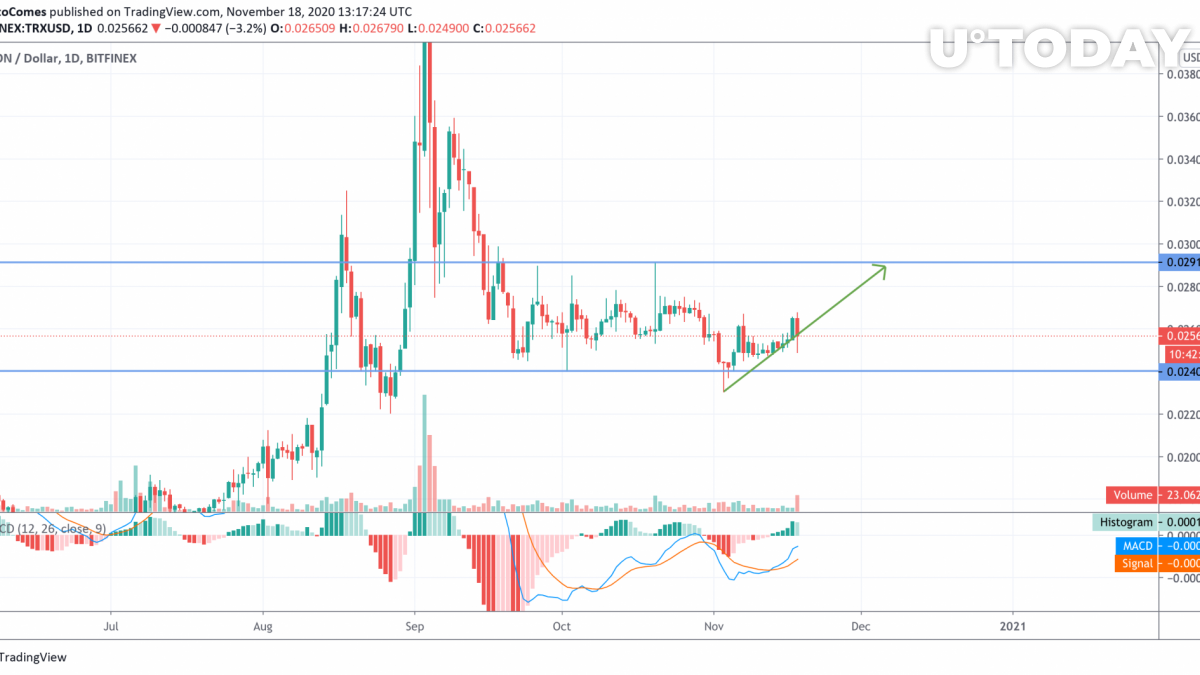 On the daily chart, Tron (TRX) is accumulating effort for a rise. Its growth potential is supported by an increasing trading volume, and the lines of the MACD indicator are moving up. However, it may take some time before the altcoin returns to the previous peaks. In this case, the next vital resistance at $0.0291 may be attained at the beginning of December.

The rate of EOS has gone down even deeper than TRX as the price change over the last day has made up -2.62%. 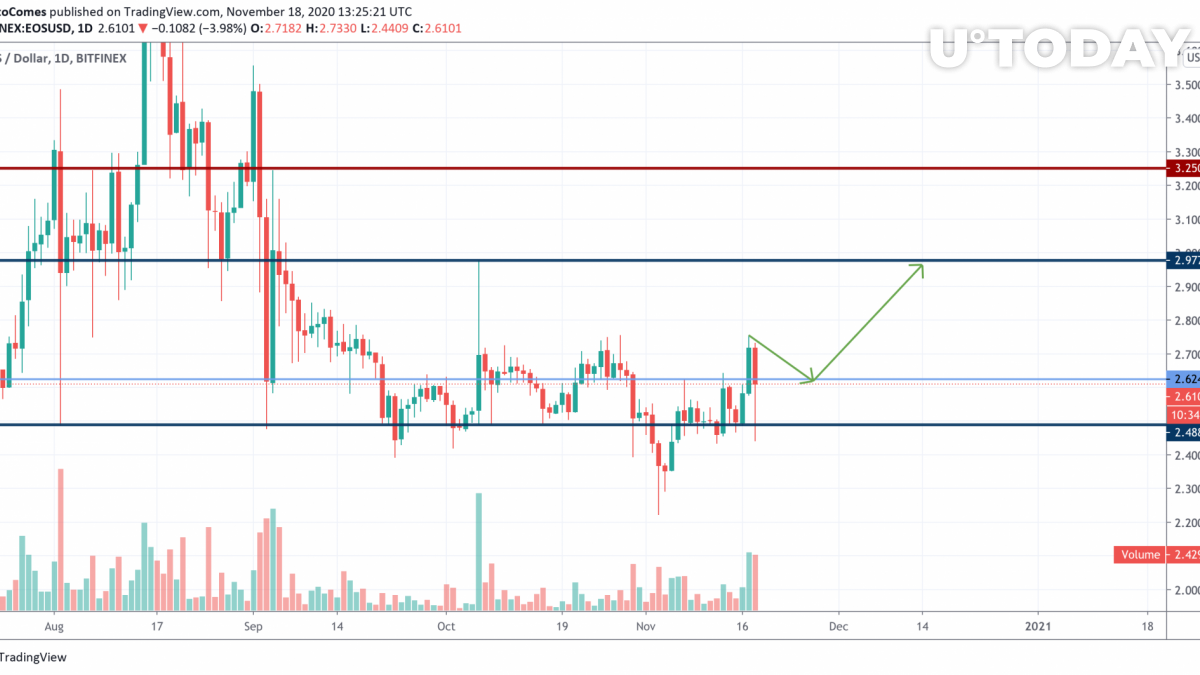 According to the chart, EOS is not ready for a price blast as the altcoin has not gathered enough power. Thus, the selling trading volume is quite high. One more short-term correction may happen before the crypto comes back to the resistance at $2.97.

Cardano (ADA) is the main loser from our list today as its price has decreased by 3.82%. 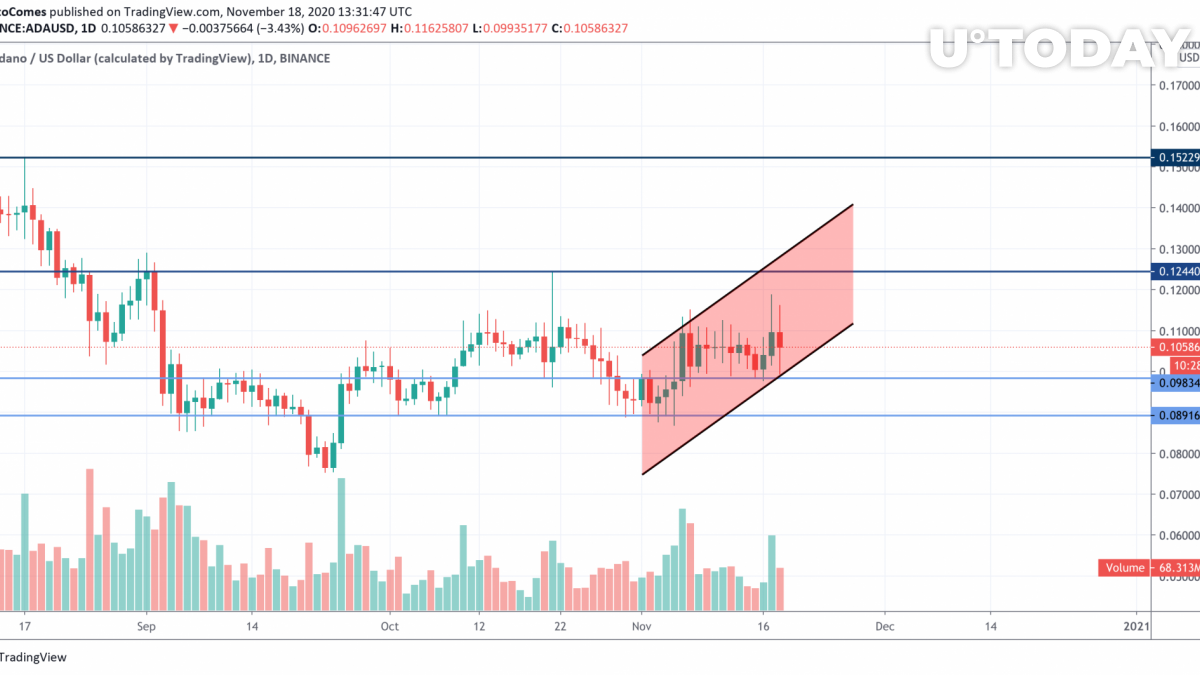 However, the current decline is rather a correction before continued growth. The buying trading volume is high, which means that buyers are not ready to give up at the moment. Thus, the rising channel has not been broken yet. That is why bulls’ chances of reaching $0.1244 by the end of the year remain relevant.

Chainlink (LINK) is one of the few altcoins that is still located in the green zone. Its price has increased by 5.93%. 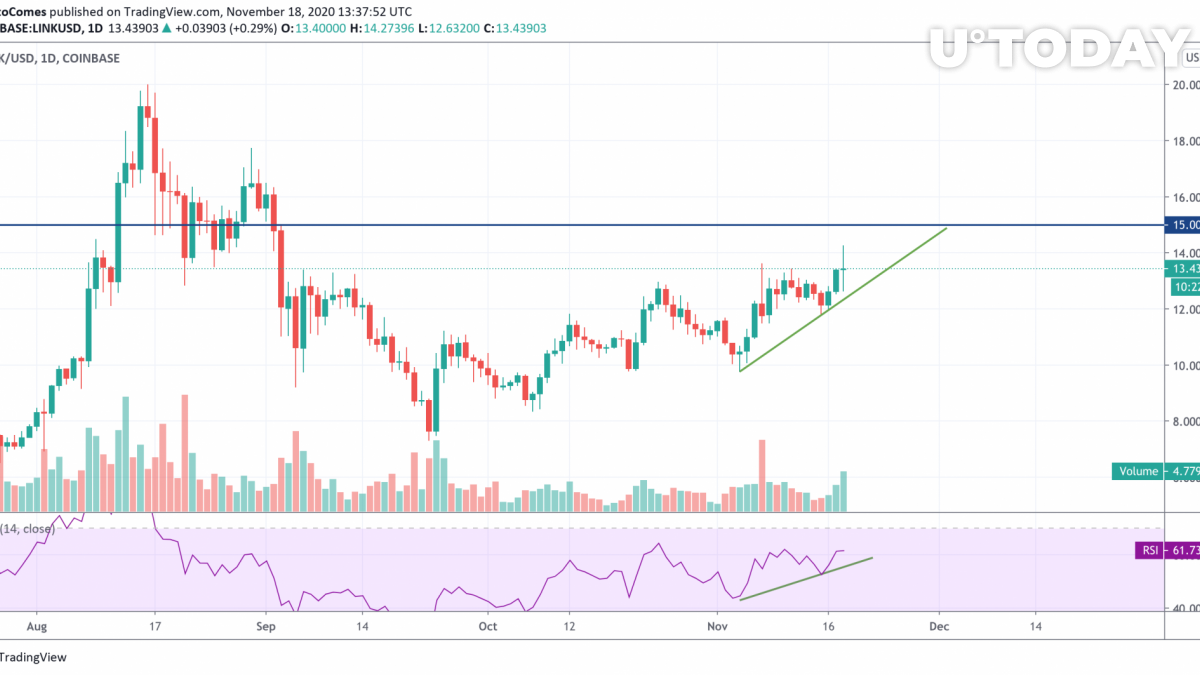 From the technical point of view, Chainlink (LINK) is looking more bullish than other altcoins. It has accumulated enough power to come back to the vital $15 level. Furthermore, the bullish divergence on the RSI indicator supports ongoing growth.

Back to Top
Close Add new link
X
How vulnerable are Ethereum smart contracts?EthereumWith the total value of assets locked in DeFi now worth over $13 billion, many expect this part of the crypto-space to grow at a rapid pace. In fact, …
Ethereum