The percentage of Ethereum held on exchanges dropped to a two-year low. This suggests that the sentiment around ETH is improving ahead of ETH 2.0.

According to the data from Santiment, the percentage of ETH held on exchanges dropped to a two-year low. This indicates that there is lower selling pressure on Ethereum as its price holds stable above $450.

There are two key reasons why ETH on exchanges is declining. First, ETH 2.0 is nearing with an expected mainnet launch in December 2020. Second, it shows that the appetite to sell Ethereum at the current price level is relatively low. 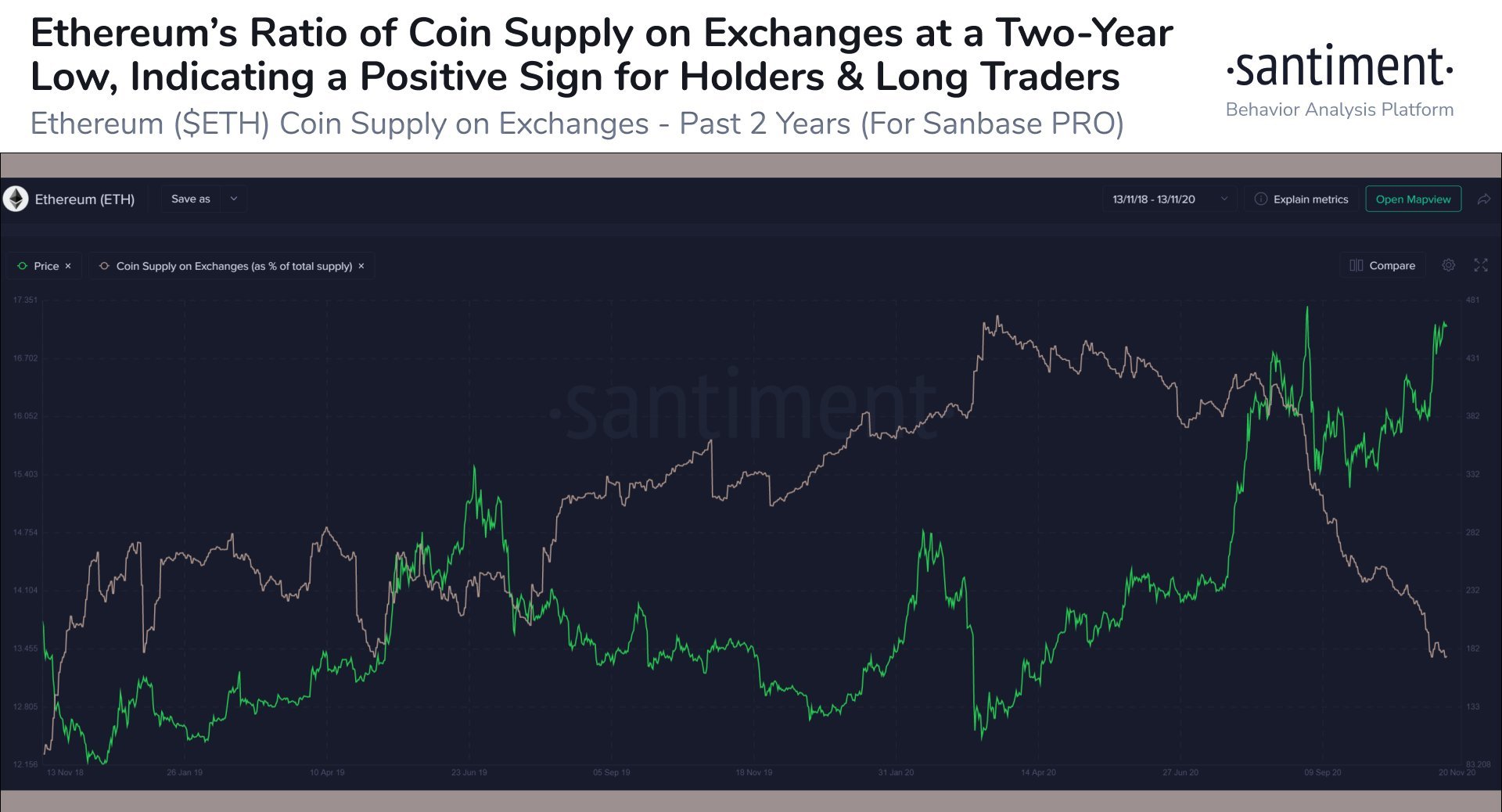 Why ETH 2.0 is causing supply on exchanges to drop, strengthening Ethereum momentum

ETH 2.0 is a critical network upgrade for Ethereum because it expands its capacity to process transactions.

The ETH 2.0 upgrade is causing the supply of exchanges to drop because of the concept called “staking.”

The upgrade features a mechanism known as staking, which essentially allows users to deposit 32 ETH into Ethereum. Users that stake 32 ETH can process Ethereum transactions on the blockchain. In return, they receive around 15% return every year on their ETH holdings.

When users stake, they move their holdings into the eth2 deposit address. Although users can pull out of staking at any time, if they want to receive the yield, they need to continue staking. During staking, they cannot send or spend the 32 ETH.

Analysts at Santiment said that this trend shows a major sell-off is becoming unlikely as a result.

Since there is a noticeable dip in ETH exchange reserves, there is a lower probability that whales would lead to a massive market pullback. They wrote:

“The percentage of total ETH being held on exchanges today (13.35%) has not been this low since November 23, 2018. The almost exact two-year milestone is a positive sign for Ethereum holders, who have historically benefited when supply held off of exchanges is kept low. It indicates that large whale selloff probabilities will remain limited.”

For now, ETH is remaining relatively stable above $450, a level that saw sharp rejections in the past.

Back to Top
Close Add new link
X
Bitcoin SV, Ontology, Maker Price Analysis: 14 November…EthereumBitcoin’s dominance was noted to be around 65.27% at press time, after a drop from 65.99%. A rise in the said metric, alongside an appreciating Bitc…
Ethereum