Throughout 2020, net outflows on cryptocurrency exchanges have noticeably increased. Since investors often deposit funds to exchanges to sell their holdings, high outflows indicate an accumulation trend.

“Netflow (Inflows – Outflows) across the most widely used exchanges), has consistently remained negative throughout 2020. Prolonged periods of negativity are indicative of buyers moving coins off exchanges to hold, thereby leaving demand to chase a decreasing on-exchange supply Tldr; Bullish for price,” Russi wrote.

Alongside retail investors, whales have also started to send less bitcoin to exchanges. At least in the short term, that indicates an overall decrease in selling pressure coming from whales. 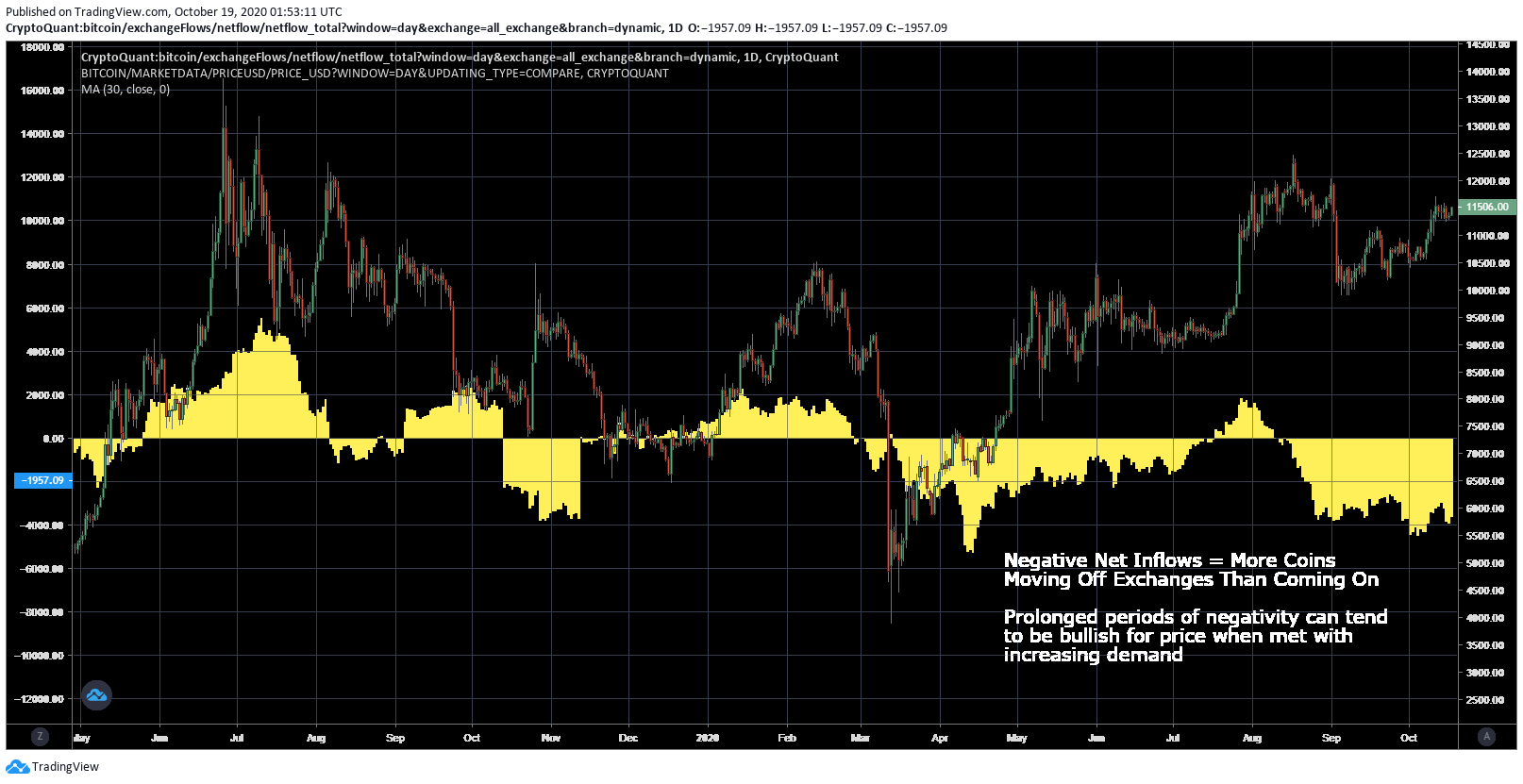 If both retail investors and whales have less bitcoin to sell across major exchanges, but the institutional accumulation of bitcoin continues, the trend could raise the probability of a bull run.

The “Exchange Whale Ratio” flashed a buy signal in late September, according to Russi. Since then, the Bitcoin price has increased by around 9%, from $10,776 to $11,750. He said:

Exchange ‘Whale’ Ratio (90D MA) is a ratio of the top 10 inflows over the total # of inflows per day of each major exchange. Lower ratio = less ‘whales’ pushing coins onto exchanges = lower threat of downward selling pressure = safer areas to buy at Flashed buy in late Sept.

The trend is in line with overall decreased bitcoin holdings across major exchanges, as the BTC Times previously reported.

The U.S. dollar has been on the decline, which would likely benefit alternative stores of value, primarily Bitcoin and gold.

Grayscale, Bakkt, CME, and LMAX Digital have all seen an increase in inflows and trading activity, which demonstrates high institutional demand.

Most recently, the Bitcoin hash rate has hit a new all-time high. Particularly after the third halving, which occurred on May 11th of this year, a record-high hash rate is highly optimistic.

Theoretically, the hash rate should drop after a halving as it slashes rewards for miners in half overnight, exclusive of fees. Yet, the Bitcoin hash rate has continuously increased since the halving, apart from a short-term drop a few days after the halving.

Read Also:   CNBC Asks MicroStrategy CEO Why His Firm Holds So Much Bitcoin

The confluence of positive exchange data trends and the consistently rising hash rate has lifted the overall sentiment around the Bitcoin market in the fourth quarter.

Joseph Young is a financial analyst based in South Korea. He has covered Bitcoin and the crypto market since 2013. He regularly contributes to the BTC Times, Forbes, and Cointelegraph.

Exchange Data Suggests a Bitcoin Bull Run Is Near

by Brian P. Mandell
3 min
X
Smaller Assets Like Ethereum Are on the RiseBitcoinA very cool thing is happening as of late. While bitcoin makes another attempt at $20,000 – a figure it hasn’t seen in nearly three years – the …