Former Australian politician Cory Bernardi, who sat in the local Senate from 2006 to 2020, admits that he has been converted to Bitcoin as of late, and that the demand for BTC is growing stronger.

Cory Bernardi, who resigned from the Australian parliament recently, has taken to Twitter to share his recent piece on the mortgage market.

Answering one of the comments left by a Bitcoiner, Bernardi revealed his stance by saying that he has become a convert to Bitcoin over the last couple of years.

“The millennial’s version of gold”

The former politician has compared Bitcoin to gold, calling BTC the millennial’s version of gold. He admits that there are risks associated with the biggest-market-cap crypto. However, Bernardi pointed out that they are similar to the risks you face with other asset classes.

Last year’s studies proved that Bitcoin and cryptocurrencies overall are preferred mostly by millennials, who would rather invest in digital assets (and Bitcoin in particular) than in the stock market or real estate. This is in contrast to the previous generation of baby boomers.

Besides, a lot of crypto platform founders are millennials themselves, i.e., Vitalik Buterin, Justin Sun and Brendan Blumer.

As for Bitcoin demand, he specified that, at the moment, this parameter is gaining strength.

As reported previously by U.Today, the Bitcoin market may be in the midst of corporate FOMO right now. Public corporations that are allocating their funds to Bitcoin are Microstrategy, Square and Grayscale. The first two are obtaining BTC as a reserve currency.

However, a lot of non-public companies are also acquiring BTC, according to Statis CEO Gregory Klumov.

Multiple BTC acquisitions, according to Klumov, are happening now via the Time Weighted Average Price (TWAP) algorithm; it is frequently used by institutional clients who want to set up a position in a limited period of time.

Apart from that, the community has been pleasantly shocked to see that renowned Bitcoin hater Nouriel Roubini (aka Dr. Doom) has said in a video interview that Bitcoin could be used as a partial store of value due to its hard-fixed supply. He added that he does not believe BTC to be a currency.

However, after that he published a tweet in which he took another jap at Bitcoin in his typical manner. 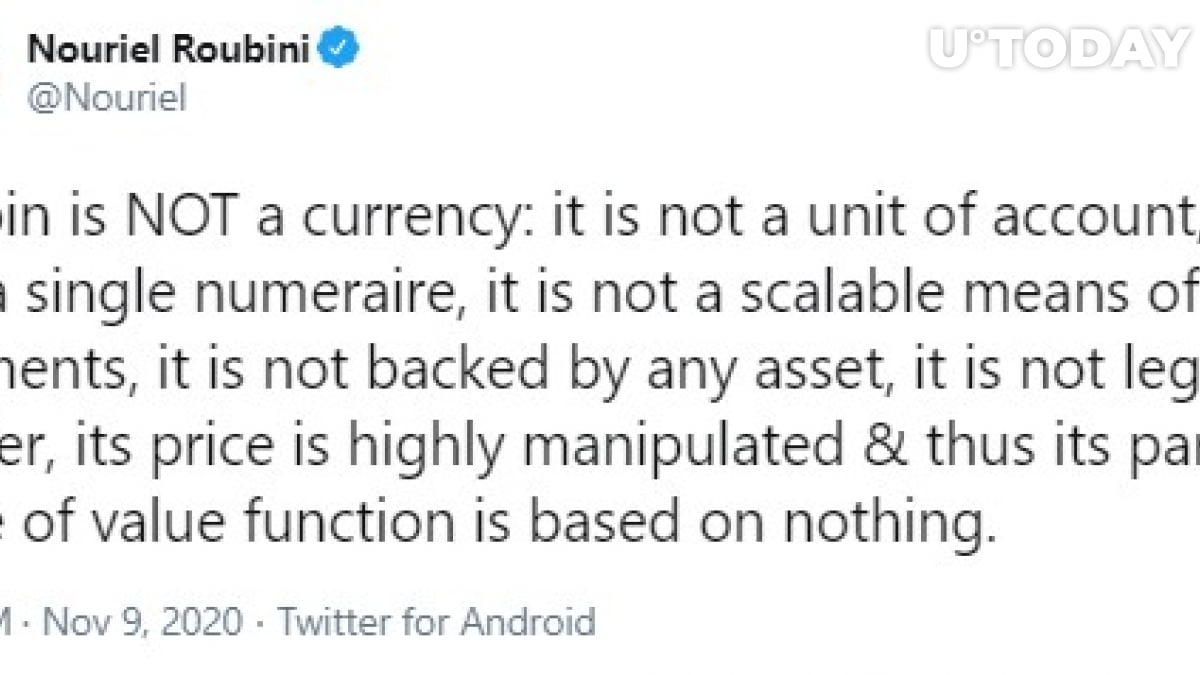 by Alex Dovbnya
3 min
X
Litecoin short-term Price Analysis: 11 NovemberEthereumDisclaimer: The findings of the following article attempt to analyze the emerging patterns in the Litecoin short-term market and its impact on the pr…
Choose A Format
Poll
Voting to make decisions or determine opinions
Story
Formatted Text with Embeds and Visuals
List
The Classic Internet Listicles
Open List
Submit your own item and vote up for the best submission
Meme
Upload your own images to make custom memes
Audio
Soundcloud or Mixcloud Embeds
Image
Photo or GIF
Gif
GIF format