Bitcoin (BTC) continues to be in the red following its slip below the psychological price of $40,000, a scenario not seen in the last two weeks.

The leading cryptocurrency was down by 6.38% in the last 24 hours to hit $36,732 during intraday trading, according to CoinMarketCap.

Analysis by IntoTheBlock shows that short-term holders have been the primary catalysts of the present leg down as they continue liquidating their BTC investments. The market insight provider explained:

“Short-term holders continue to be the main driver of BTC volatility. While long-term holders remain unfazed, the balance held by traders – addresses less than 1 month, are moving almost in tandem with the price action. Since Feb 14, they decreased their holdings by 8.7% to 1.55m BTC.”

Some of the factors that might have triggered short-term holders to be on a selling spree entail the Ukraine-Russia tension, given that a full-blown war between the two nations seems likely.

On the other hand, low BTC network activity triggers the current drawdown because of slashed demand. Economist Jan Wustenfeld stated:

“While the supply of Bitcoin is becoming more illiquid, which is good, network activity remains relatively low and partially even decreases further. Considering the total on-chain transaction value of $BTC since mid-2021 it has been low.” 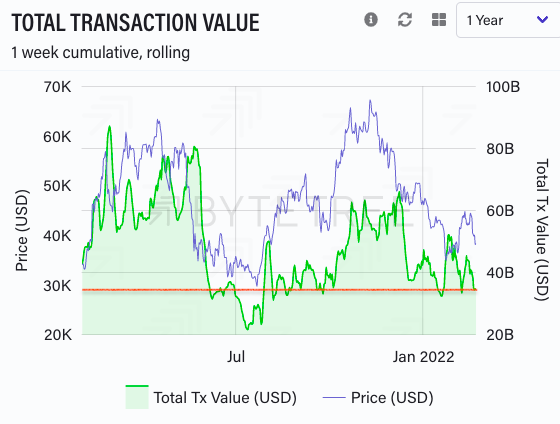 Therefore, BTC demand should be rejuvenated so that the leading cryptocurrency can be back to winning ways.