Bitcoin maximalists, Max Keiser among them, are taking guesses as to whether Apple will follow in the footsteps of Microstrategy and allocate part of its $191 bln in BTC

Prominent Bitcoin advocate Max Keiser has tweeted that Apple tech giant is now sitting on a pile of cash of more than $191 bln.

As USD is decreasing in value at the moment, a few other Bitcoin maximalists, including BlockStream CSO and trader Scott Melter, have started discussions on their Twitter pages as to whether Apple is going to make a bet on Bitcoin or not.

“Apple’s cash is decreasing in value.” Will it convert some of it to Bitcoin?

Melker and Mow are wondering whether the global upmarket tech giant is going to follow in the steps of Microstrategy and Jack Dorsey’s Square and allocate at least some of it into Bitcoin—even as little as one percent before this cash pile is largely devalued by the current economic crisis.

In the comment threads of Keiser and Melker, some readers assumed that Microsoft might make this bet before Apple. 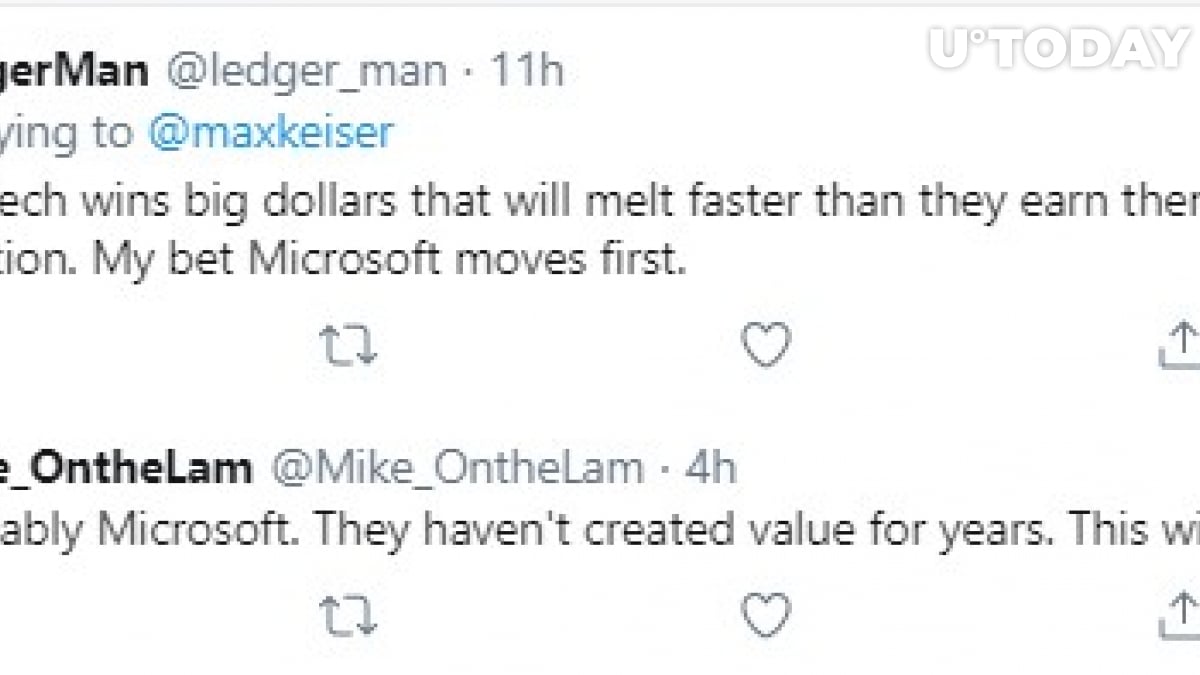 Previously, U.Today reported that the crypto community, including Cameron Winklevoss and Bitcoin maximalist John Carvalho, raised the similar topic of “who will be next to adopt Bitcoin.” Only that was regarding Tesla chief Elon Musk.

The discussion was triggered after Jack Dorsey’s Square allocated $50 mln in Bitcoin following Microstrategy, with its $425-mln BTC bet.

Earlier, Elon Musk tweeted that he owned 0.25 BTC sent to him by friends. He denied having any other crypto holdings. The Tesla CEO is well known for his love of Dogecoin, and he once opined that crypto might be a substitute for money in the future but he does not see it as a primary database.

That said, I still only own 0.25 BTC, which a friend sent me several years ago. Don’t have any crypto holdings.

On Thurs., Oct. 29, head of Microstrategy Michael Saylor took to Twitter to reveal that his company had been running a full Bitcoin node (version 0.20.1) for more than thirty days now.

Saylor admitted it was an honor for them to be a part of the Bitcoin network and support its growth.

Back to Top
Close Add new link
X
Coinbase Review: A Great Jumping-On Point For Bitcoin Beginners…EthereumIn briefCoinbase is one of the largest and most well-known digital currency exchanges in the world. It's an accessible on-ramp for newcomers to the cr…
Ethereum

Will Apple Grab Bitcoin to Save Its $191 Bln in Cash? Crypto Influencers Taking Guesses

by Alex Dovbnya
3 min
X
This country will now buy state-mined Bitcoin to fund imports…EthereumThe Irani government will now allow imports to be paid for using Bitcoin, as per a recent report in local publication ISNA. The move is the first-of-i…